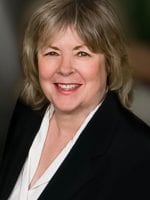 DENISE M. BAINTON is a Shareholder in the Firm’s Tucson office.  Her practice emphasizes school law and employment matters.  Ms. Bainton joined the Firm in 1984 after serving as Law Clerk to the late Judge William P. Copple of the United States District Court.  From 1971 through 1980, she taught in the Flowing Wells schools in Tucson.

She has successfully defended Arizona public school districts in several important cases including Endangered Species Act litigation brought in federal court by environmental groups to try to stop the construction of a new high school; open meeting law litigation; and a lawsuit by several administrators who maintained that they should have been offered contracts as tenured teachers when they failed to sign their administrative contracts.  She has extensive experience in representing public school districts in special education due process hearings and before state and federal administrative agencies such as the Arizona Civil Rights Division, the United States Department of Education Office for Civil Rights, the EEOC, and various state licensing boards.  She is a member of the NSBA Council of School Attorneys and has served on its national Board of Directors.  She is listed in Who’s Who in America, Who’s Who in American Law and Best Lawyers in America.  She holds an AV® rating from Martindale-Hubbell.

Ms. Bainton has a Bachelors and a Masters in Music Education and is a graduate (with the highest distinction) of the University of Arizona College of Law.  She received an Outstanding Graduate (alumni) Award from the University of Arizona College of Law in 1988.  While in law school, she served as an editor of the Arizona Law Review, and received the Dannie Lee Chandler Award for Special Contribution to the Advancement of First Amendment Values, the Lorna E. Lockwood Memorial Award for Outstanding Female Law Student, and the American Jurisprudence Award for Constitutional Law.  She was admitted to the Arizona Bar in 1983 and is admitted to practice before the United States Supreme Court.