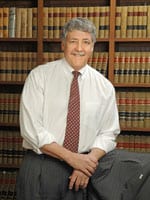 JAMES A. JUTRY, CPA (RET) is Of Counsel with DeConcini McDonald Yetwin and Lacy, P.C. and  practices in the areas of local, state and federal taxation, business and transactional planning, corporations, partnerships, limited liability companies, estate planning, probate and charitable organizations. He was previously certified by the State Bar of Arizona as a tax specialist.

Mr. Jutry has assisted clients in benefit and compensation planning including designing and implementing “cafeteria” or flexible benefit plans under Internal Revenue Code §125.  He has advised organizations on obtaining and maintaining tax-exempt status under Internal Revenue Code §501(c), including addressing such issues as improper inurement, permitted lobbying expenditures, prohibited political activity and acquisition and disposition of charitable donations. Mr. Jutry also represents taxpayers in disputes with the audit and collection divisions of the Internal Revenue Service and the Arizona Department of Revenue and in sales and use tax controversies with the Arizona Department of Revenue and local taxing authorities.