This story had an unusual element to it, however. The scammers didn’t ask for a regular credit card. Instead, they asked for an iTunes gift card. The victims apparently went to Walgreens, bought an iTunes gift card, and gave the card number to the scammers. After the scam worked the first time, the scammers came back for more the next day, but the victims’ daughter got wind of the scam and was somehow able to move the gift card funds to her husband’s iTunes account before the scammers could get them.

That left the victims in something of a predicament. Their money is in an iTunes account, for which they have no use. Apple won’t refund the account balance in cash, because Apple didn’t get the money that the victims paid for gift card, Walgreens did, and Walgreens bought it from a third party, not from Apple.

The other problem confronting the victims is that the scammers aren’t even in the United States, so even locating them, let alone getting anything from them, is probably impossible.

But wait, there’s an apparently easy (if imperfect) solution to this dilemma. I had never heard of this until a family member went to work for Giftcard Zen (a company based in Phoenix), but I now know that there is a thriving, and legal, resale market for unused gift cards. The victims in this case wouldn’t get all their money back because the companies that buy and resell gift cards will only buy at a discount (that’s how they make a profit), but the victims could probably get most of their money back by selling their iTunes gift card to a gift card reseller.

The larger moral of the story here is: don’t give out valuable information over the phone unless you are certain you can trust the person on the other end of the phone, particularly if you didn’t initiate the call.

These scams are widespread, so be alert. If the victims in this story had heard about such scams, they might have at least paused long enough to think: why would a law enforcement officer be asking for a gift card to pay our grandson’s bail?

I have never received this particular variety of scam call, but I have received others. The one that has bothered me the most is the one in which the caller says they are calling on behalf of “Internal Revenue Services.”

IF YOU GET A PHONE CALL FROM “INTERNAL REVENUE SERVICES,” HANG UP

Have you received a recorded call in which the caller says they are calling on behalf of “Internal Revenue Services?” I have received such calls several times recently. I didn’t answer the calls, but I let my answering machine record them, then listened to them. The call was essentially the same each time.

I’ll explain. I can’t recite the script of the call, but I don’t think they ever actually say that you owe the IRS money. The caller starts off by saying that a lawsuit has been filed against you and that law enforcement personnel are on the way to your home, right now, to arrest you. You are then told that you must return the call immediately. The caller doesn’t say what will happen when you return the call, but I can tell you with absolute certainty: you will be asked to give your social security number, credit card number, bank account information, and whatever other valuable information the scammers can get out of you, so that they can steal your identity, steal from your credit card, steal from your bank account, and steal from you in any other way possible.

Stop and think about this scenario for a second and I’m sure you will appreciate how brazen these thieves are. First, don’t you think they’d be able to get the name of the agency right? When did anyone refer to the IRS as “Internal Revenue Services?” I distinctly remember that they said “services,” plural. That’s a detail that’s not going to get past me.

Even if you were being charged with a crime relating to unpaid taxes, you wouldn’t be getting a recorded phone call about it. The United States Attorney would get an indictment and send the marshal to arrest you, and I don’t think they would call to tell you the marshal is on the way. You would probably know that you were under investigation, however, long before the marshal came knocking to arrest you.

Now maybe if you knew that you actually were under investigation, this call might sound real enough to scare you. More likely, however, these thieves are hoping that the person receiving the call will be too uninformed or unaware to recognize it as a hoax, such as recent immigrants, the elderly, and others who are particularly vulnerable. That’s what makes it so disgusting. 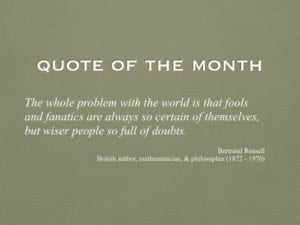 Nahan B. Hannah is a Shareholder in the Tucson office, and practices in the areas of estate planning and administration, real estate, and commercial transactions.  He is also a noted blogger, and you can find more of his articles on his private blog,