I have addressed in previous reports the tax consequences of gifts and inheritances, but the subject is worth revisiting because I get asked about it frequently.

There is a common misconception that inheritances are automatically taxable. Although the reasoning behind that misconception is usually not clearly articulated or is unexpressed, I think it originates with the notion that an inheritance is income, and is therefore subject to the income tax, like wages. People don’t, however, seem to have the same notion about gifts. In other words, people don’t generally assume that gifts are taxable.

To illustrate the distinction between gifts and income, think about this example. If you get a check for $100 from your grandmother for Christmas, you don’t include it on your income tax return, do you?

When you put it that way, the distinction seems fairly obvious. The gift is not taxable income.

But in the context of an estate, I guess it’s not so obvious. It’s a question I get asked fairly regularly, or rather an assumption that is expressed something along the lines of: I don’t want my children or grandchildren to have to pay tax on the money I leave them in my will.

Maybe the assumption that an inheritance will be taxed is actually founded on the fact that inheritances are taxable in some states (but not in Arizona), and estates and gifts are subject to the federal estate and gift taxes if they are large enough. Those taxes are different from the income tax, however. Inheritance, estate, and gift taxes are taxes on the transfer of property (usually payable by the transferor), not on the receipt of income (payable by the recipient).

The Internal Revenue Code is pretty clear on the issue of whether or not a gift is a taxable income. Section 102(a) says:

(a)  General rule. Gross income does not include the value of property acquired by gift, bequest, devise, or inheritance.

The regulation that explains that code section is also pretty direct:

So your inheritance is no different from the $100 check from your grandmother, for tax purposes. It’s a gift, not income.

When I was a kid, my Aunt Gerry always gave me and my siblings each a card with a crisp, new $5 bill in it for Christmas. They were the kind of cards that had a pocket for a bill, with an opening that showed the face of the president on the bill. I think you have to be over 50 to remember them. I’m sure she made a special trip to the bank to get those cards and the $5 bills.

I still think that was a very generous gift. I never worried about whether to include it on my tax return, though, probably because I didn’t have any income.

STOP AND THINK FOR A MINUTE: Would a U.S. Government Agency Ask You To Pay A Transaction Fee with iTunes Gift Cards?

In my report for July of last year, I wrote about a currently prevalent type of scam that utilizes scripted telephone calls to elderly people. The scammers are banking on their victims being too panicked to stop and think for a minute because if they did, they would probably realize that they were being scammed.

In a story that appeared recently on the web site of a local TV news outlet, a scam victim described a telephone call from someone who said he was calling from the “U.S. Government Grant Department,” and said that he had $9,000 in federal grant money for the victim. All the victim had to do was pay a $150 “transaction fee.” The scammer told the victim to go and buy $150 worth of iTunes gift cards and give him the card numbers, which the victim dutifully did.

The scammer then decided to go for more, telling the victim that since it was an “out of state transaction” she would also have to pay $900 for “insurance.” When she said that was beyond her means, the scammer reduced the price to $425. Perhaps because at that point she was starting to catch on, the victim called her bank, who told her she had been scammed.

Are there enough red flags in that script? I’m not sure how you could get many more in there without the integrity of the scam falling apart completely. Stop and think: if something sounds too good to be true, then it probably is too good to be true. 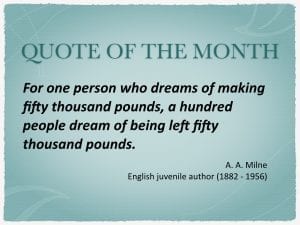