Since it’s tax time, it’s time to revisit the Internal Revenue Service’s periodic notice reminding taxpayers to stay away from “abusive tax-avoidance schemes” that will only get you into trouble. As the IRS says: “If an idea to save on taxes seems too good to be true, it probably is.”

The IRS notice lists what they call “some of the most common frivolous arguments used by… abusive tax-avoidance schemes.” Many of them really need no explanation. Here is a sampling of the claims you should not make:

There are a few equally wrong, but slightly more plausible, tax dodges listed in the IRS notice that merit a little explanation because the faulty logic supporting them is not obvious without a little background. Here are some examples:

The IRS notice goes on to highlight some of the penalties that can be imposed if you use one of the schemes discussed above:

Have you filed your tax return yet? 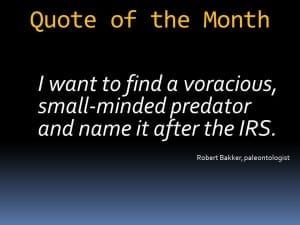 Nathan B. Hannah is a Shareholder in the Tucson office, and practices in the areas of estate planning and administration, real estate, and commercial transactions.  He is also a noted blogger, and you can find more of his articles on his private blog.