DeConcini McDonald Yetwin & Lacy is pleased to announce that law clerk Megan Trog has completed her second year (2L) at the Sandra Day O’Connor College of Law and was given two awards for her scholastic achievements.  Ms. Trog has been honored with both the William H. Pedrick Scholar Award and the CALI Excellence for the Future Award. 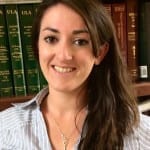 The William H. Pedrick Scholar Award is given only to law students who have achieved an outstanding grade point average of 3.5 and above while taking a full course load.  The CALI Excellence for the Future Award is presented to students who received the highest grade in a legal class.  Ms. Trog received the CALI award for achieving the highest grade in the Defender Clinic (a six credit course,  Supreme Court Rule 38(d) ). It should be noted that not only did she achieve the highest grade in that class, but she and her assigned partner conducted a three day jury trial on possession of narcotic (cocaine) charges, obtaining an acquittal for the clinic’s client.

The attorneys and staff at DMYL congratulate Megan Trog for her achievements and wish her and her fellow ASU law students much success in the coming school term.