I have not been paying a whole lot of attention to the home mortgage situation, but I did notice some interesting news not too long ago. The Wall Street Journal reported, on October 22, 2014, that Fannie Mae and Freddie Mac, the federal agencies that provide financial backing for home mortgages, will lower the down payment requirement for mortgages to as little as 3%. Just for some perspective, that would mean you could get a loan on a house up to $333,333 with a down payment of less than $10,000! I’m going to editorialize here: the home mortgage market is an over-complicated, over- regulated mess. I don’t think you are going to be able to convince me that the decision to lower the amount required for a down payment on a government-backed home mortgage is a decision that is driven by market forces. I’m not saying there might not be other reasons for the decision (obviously there are), but those reasons don’t have anything to do with protecting the interests of the lender.

Why might it not be a good idea for a lender to make a loan of $300,000 to a borrower who has invested less than $10,000 of their own money in the enterprise? Doesn’t the question answer itself? Isn’t it in the lender’s interest to make sure the borrower has enough of a stake in the acquisition to encourage repayment of the loan? And from the borrower’s end, why might it not be a good idea to take advantage of easy credit to acquire an asset that could decline in value and that takes considerable time and expense to liquidate? What if a change in circumstances makes it imperative that you sell quickly at a time when the value has declined? There has already been a lot of commentary about the pros and cons of encouraging low-down- payment home loans, but I haven’t seen it critiqued much more effectively than in an item posted on Bloomberg View on October 23, where the writer said this:

Leveraged bets are great when they pay off; when they don’t, they leave you dead broke. Especially a bet on a large, illiquid asset such as a house. Put a homeowner into one of these gambles at the age of 35, send the local housing and job markets south a few years later, and the end result is a broke middle-age person with trashed credit in desperate need of a good rental unit¼. [W]e seem to have a lot of them around right now.

When a huge segment of the market has negative equity or has equity too low to cover the substantial costs of a sale, then in any economic downturn, you are going to end up with a lot of foreclosures.

…[M]ost of us still haven’t managed to shed the idea that buying a house is a good way to get some unearned bonus wealth. Too many people managed to do just that for too many years. We think of 2008 as an aberration, rather than reversion to the mean. And that’s a costly mental error.

I think those comments capture pretty well the reasons why home mortgages with only a 3%down payment may not be such a good idea. 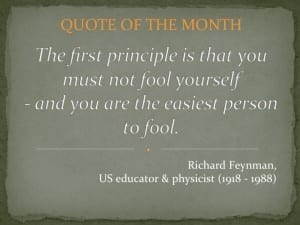 REPORT: 29% of Americans Keep Some Savings In Cash; Are You Keeping It Somewhere Safe?

According to a January 29 report from CNBC, based on a survey by American Express, nearly one-third of Americans say that they keep at least some savings in cash. An earlier survey mentioned in the CNBC report found that of those who kept cash in their house, 27% kept it in the freezer.

I have had clients tell me that they keep their estate plan documents in the freezer. I say, as long as someone other than you knows where they are and can get to them if necessary, anyplace where they won’t burn up if the house burns down is fine. A moisture-proof container is recommended if you’re going to put them in the freezer.

With estate plan documents, a safe place is where they won’t be lost or destroyed. Preventing theft isn’t the issue, unlike with cash.

As for not keeping your savings in the bank, I can’t say that I blame the 67% of young people who said they keep savings in cash rather than in the bank. They have grown up in an era where there is really no financial advantage to keeping a savings account. When I learned to save, one of the incentives was that the savings earned interest. Although I understand that the whole interest rate thing is very complex, it’s a shame that the younger generation (not to mention senior citizens who relied on interest income from their retirement savings) has been deprived of that incentive to save. I’m sure it has had a negative impact on the savings rate.

Nathan B. Hannah is a Shareholder in the Tucson office, and practices in the areas of estate planning and administration, real estate, and commercial transactions.  He is also a noted blogger, and you can find more of his articles on his private blog.