Tax Law Special Report: April 2019 If I Didn’t File My Tax Return On Time, What Excuses Will Be Good Enough To Get Me Out of Paying A Penalty?

A tax newsletter that I read reported on a court decision that I think is worth passing along to you, my loyal readers. It’s a decision from the United States Court of Federal Claims that addresses this timely question: if I file a tax return late (without requesting an extension), what excuses might be good enough to avoid having to pay penalties for the late filing?

The taxpayer in the reported case gave gifts of $2 million to each of her daughters on January 1. The taxpayer owed approximately $1,800,000 in gift taxes for the year, mainly because of the gifts to her daughters. The taxpayer’s gift tax return (it’s Form 709, in case you’re interested) and payment were due on April 15 of the following year.

During the period between the date the gifts were made, January 1, and the date that the gift tax return was due and the gift tax was payable, April 15 of the following year, the taxpayer did such things as reviewing deeds for transferring real property, visiting notaries, telephoning tax attorneys, and mailing completed documents to her tax attorneys. The taxpayer also reviewed her federal and state income tax returns for the preceding year and her state estimated tax returns for the current year, made out checks, and mailed the checks for her income tax payments along with payment vouchers before April 15. She did not, however, file the gift tax return or pay the gift tax for the gifts she made 15½ months earlier, and which were due on the same day as the income tax filings and payments that she did make.

In September, about five months after the due date, the taxpayer finally filed a gift tax return for the gifts that she had made on January 1 of the preceding year. The IRS assessed a penalty and interest for the late filing. The taxpayer asked the IRS for an abatement of the penalty and interest, but the request was denied.

The taxpayer then went to court to try to get a refund of the penalty and interest, claiming that her health problems excused her from filing the gift tax return and paying the tax on time. The court found that the penalty and interest were proper because the taxpayer’s health problems did not render her continuously incapacitated during the period of time when she should have filed her gift tax return and paid the tax. The court went further and said that the things the taxpayer was able to do showed that she was only “selectively incapacitated” as to her gift tax obligations. Since the taxpayer did not show reasonable cause to excuse the late filing, the court dismissed her appeal.

The lesson from this case is pretty simple: if you’re going to claim a medical excuse for not filing your tax return on time, make sure you can prove you were sick enough that you were continuously incapacitated from the time when you first could have filed the return until the date the return was due. If you were able to do other business (which in the reported case included filing other tax returns and paying other taxes to the IRS), the court probably isn’t going to buy the excuse that you were too sick to file the late tax return on time.

For purposes of this subsection, the basic exclusion amount is $5,000,000.

In the case of any decedent dying in a calendar year after 2011, the dollar amount in subparagraph (A) shall be increased by an amount equal to—

(i) such dollar amount, multiplied by

Since there’s never any predicting what Congress might do, or not do, when it comes to legislation, you might want to plan ahead. 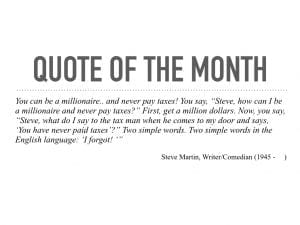