December seemed like a good time to talk about gifts, for some reason.  It’s a popular subject all the time, but particularly this time of year.

A misconception that I encounter frequently is the notion that when assets are distributed from an estate, the recipient has to pay tax on the distribution. Although the rationale is usually unclear (or unexpressed), I think the misconception is that the inheritance is taxable as income.

What does that have to do with gifts?  Well, that’s what it is when you receive something from someone’s estate.  It’s a gift.

Think about it this way.  When you get a check for $100 from your grandmother for Christmas, you don’t include it on your income tax return, do you?

When you put it that way, the distinction seems fairly obvious.  The gift is not taxable income.

But in the context of an estate, it’s not so obvious.  It’s a question I get asked fairly regularly, or rather an assumption that is expressed something along the lines of: I don’t want my children or grandchildren to have to pay tax on the money I leave them in my will.

The Internal Revenue Code is pretty clear on the issue of whether or not a gift is taxable income.  Section 102(a) says:

(a)General rule. Gross income does not include the value of property acquired by gift, bequest, devise, or inheritance.

The regulation that explains that code section is also pretty direct:

So your inheritance is no different from the $100 check from your grandmother. It’s a gift.

When I was a kid, my Aunt Gerry always gave me and my siblings each a card with a crisp, new $5 bill in it for Christmas. They were the kind of cards that had a pocket for a bill, with an opening that showed the face of the president on the bill. I think you have to be over 50 to remember them. I’m sure she made a special trip to the bank to get those cards and the $5 bills.

I still think that was a very generous gift. I never worried about whether to include it on my tax return, though, probably because I didn’t have any income.

The concept that I try to emphasize is that estate and gift taxes (I don’t talk about inheritance taxes since we don’t have them in Arizona) are transfer taxes.  It’s the transfer that triggers the tax.  And gifts are not income.  Clear?

“If You Spend Too Much Time Thinking About a Thing, You’ll Never Get It Done.”

The above quote is a statement that has been attributed to Bruce Lee, the famed martial artist and actor. There’s a lot of truth in that statement. He’s advocating action, which is only fitting for the greatest “action movie” actor of all time (sorry, Chuck Norris fans), right? 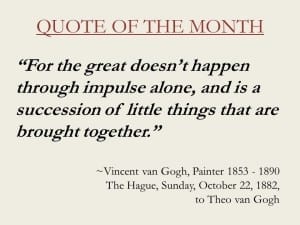 It’s sound advice. Don’t get paralyzed by indecision.  When confronted with a difficult or unpleasant task, the way to start is to identify a step you can take right now toward accomplishing the task, no matter how small that step is, and do it.

It is true that sometimes, problems solve themselves if you leave them alone for a while.  It is also true that if you are stuck, letting something sit for a while, then coming back to it, can often result in new insight that helps you complete the task.

Too often, however, letting a problem sit, in the hope that either you will think of something new or the problem will solve itself, is just a way to procrastinate.  My solution is to let a tough task sit for a little while, then grab it and get it done whether I have any new insight or not.

Did you know that, according to Wikipedia, the pallbearers at Lee’s funeral included Steve McQueen, James Coburn, Chuck Norris, and George Lazenby? That’s quite a cast, right there.